Deborah Goodrich Royce has mined some of the darker corners of her own family history to craft her third novel, Reef Road, an intriguing murder mystery that alternates between Palm Beach at the onset of the Covid-19 pandemic and the unsolved murder of a twelve-year-old girl in 1948 Pittsburgh.

The Greenwich resident will officially introduce her novel at a book launch on January 7 to benefit the Avon Theatre in Stamford, which the actress, philanthropist and author renovated along with her husband and fellow historic preservationist, Chuck Royce.

When she sat down to chat with GREENWICH magazine about Reef Road, her page-turning whodunit had already received some early enthusiastic reviews. 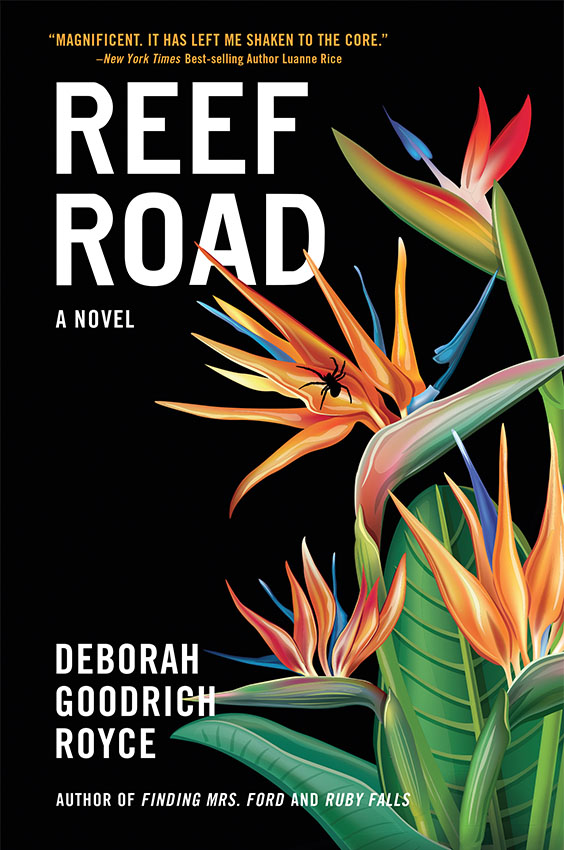 GM: Reef Road is the third novel you’ve written in a relatively short period of time, and now you’re working on your fourth. Is it hard to keep coming up with new story ideas?
Deborah Goodrich Royce: I’ve been writing for a long time, but it’s only in the last eight years that I’ve completed three novels. For the first fifty years of my life, I didn’t have that many ideas. But in the past few years, it’s been very fruitful. I like to talk about this with younger people as encouragement. I think for all of us, the exciting thing is that there are chapters to come. We have too many pressures when we’re younger. For me, it took an empty nest to free me up into the deep dive of novel-writing. And that’s been exciting. And I keep coming up with things I want to write about.

GM: This novel opens on the sands of Palm Beach with a gruesome discovery. Did the setting have personal significance?
DGR: I was in the middle of a book tour in March 2020 for the paperback release of my first book when the world came to this crashing halt because of Covid. Palm Beach was where I happened to be staying at the time, so that’s where I remained.

All my engagements got canceled. I had a new window of open time with an empty nest, and I was enveloped by this heat and sense of claustrophobia. There was an eeriness, and I was taking my twilight bike rides; riding up and down the streets of Palm Beach. And somehow, this feeling of the world crashing in around us took me back to this horrifically traumatizing event.

GM: Can you give us a little background?
DGR: My mother’s best friend was murdered in December of 1948. My mother was to go over to her house that night and didn’t for so many reasons. For my entire life, I felt the presence of that event and the impact it had on my mother’s life. So, I decided to open my computer and really did the research on those events. There was a trove of material there. I was able to get the coroner’s report and so much more.

And now I can see the serendipity of doing the book at this exact place and time. The setting was perfect. As I was doing it all, it was a hot, hot spring. There are two women in a hot house, and there was a feeling of confinement and abandonment that permeates the book. In the end, the pandemic serves as an important setting.

GM: The true-life murder case that inspired Reef Road remains unsolved. Did you come to any conclusions about the perpetrator in your research?
DGR: Well, the case was reopened in 2008, and I do hope it is eventually solved. There has always been a lot of suspicion surrounding one person, but I would never want to say if it’s him or not. What was more interesting to me than the facts was exploring the idea of generational trauma. How do we start addressing the effects something this horrific has on people and the way that impact can be passed down? How does it happen and how do you stop it? What do we need to do as a society and as individuals to make that happen? If you look at this kind of trauma, it’s a bit like a hamster on a wheel. How do you knock the hamster off? Is it therapy? Is it something else? This novel goes to a much darker place.

GM: Did your mother read the book?
DGR: She did and she approves, although she’s glad our lives were not as nearly as dark as the ones I imagined for the book.

GM: Reef Road relies on an unreliable narrator to give it a dark and twisty turn. Was is it fun crafting a voice that couldn’t quite be trusted?
DGR: A lot of fun! You know, I’m really intrigued by the secrets people keep. Of course, some of them are of no consequence, but every once in a while you find out something about someone and ask yourself, “How did I not see that coming?” I’ve certainly encountered a few people in my life who had some incredible backstories you never, ever would have imagined. That fascinates me. I’m a huge fan of Hitchcock films, and I love the idea of a twist and a reveal. Sometimes when your writing this stuff, you even surprise yourself.

My narrator certainly did. And that’s very exhilarating.

GM: Earlier in your life,
you worked as an actress. Who would you cast to play the main Reef Road characters: “The Writer” and “The Wife”?
DGR: I have thought about the role of “The Writer” quite a bit, and I would love to see Cate Blanchett. She’s so beautiful and incredibly talented. For the wife, who has to be about fifteen years younger and incredibly beautiful, I think there are a lot of ways you could go should this ever end up on film.

GM: How about Scarlett Johansson?
DGR: Oh, I like that idea. Let’s go with her. She’d be so interesting and mysterious. I’d be very pleased to see her.

GM: What’s next for you?
DGR: I’m one hundred pages into my next book. I’m not ready to talk about the plot quite yet. I don’t know how far I’ll get before this next book tour begins, but the plan is to take it as far as I can before we have our launch for this one.

For one local man, it doubles as therapy